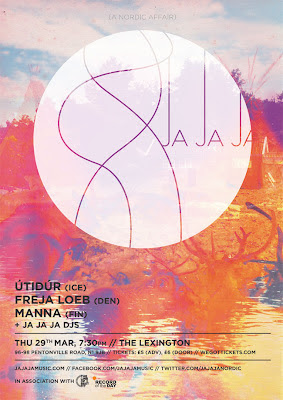 Ja Ja Ja Music
presents
Útidúr
Freja Loeb
Manna
Thursday 29. March 2012 @ The Lexington, London N1 9JB
Tickets £5 adv
www.jajajamusic.com
Útidúr (pronounced: ooh! – detour) are a twelve-piece group comprising players on double bass, drums, trumpet, violins, a second guitar and an accordion. They play joyous and ambitious chamber-pop with a dramatic streak – think Angelo Badalamenti, Beirut, Calexico and Ennio Morricone. Útidúr has honed their craft for a while and began playing at various venues in downtown Reykjavík in late summer of 2009. On seeing them live for the first time, The Line of Best Fit declared them “just incredible. Music to fall in love and get your heart broken to.” Útidúr’s debut album This Mess We’ve Made is out now and was recorded at the Sigur Rós recording studio ‘Sundlaugin’ in the summer of 2010.