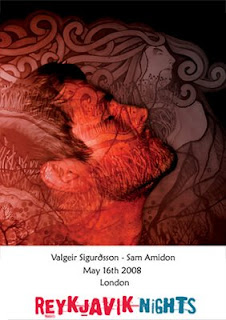 Reykjavik Nights, the UK's only dedicated Icelandic club night, is pleased to announce a collaboration with the Bedroom Community record label in putting on a very special concert - Valgeir Sigurðsson at Soho's House of St Barnabas on Friday 16th May. The event is kindly support by Reykjavik City.
Valgeir Sigurðsson first found recognition as the producer of Björk's seminal Vespertine and Medúlla albums (he's worked on every one of her albums since), as well as Bonnie Prince Billy's critically-lauded The Letting Go. His forthcoming debut solo release, Ekvílibríum, has attracted similar critical acclaim, with comments such as "this is wonderful stuff" (The Times, 4/5) and "the strength of Ekvílibríum is in the organic way Sigurðsson weds the electronic to the human... The result is a singular album, as ornate as it is direct." (The Fader).
Valgeir's European tour starts this summer and his appearance at Reykjavik Nights will be his only non-festival UK performance in the foreseeable future.
Also performing will be fellow Bedroom Community artist Sam Amidon, an American folk singer who recorded his latest album All Is Well at Valgeir's Greenhouse Studios in Iceland. The album features a myriad of contributions from the likes of Ben Frost and Nico Muhley, about which US music bible Rolling Stone recently wrote "In an era of overheated Nick Drake comparisons, Amidon is eerily close to the real thing, singing in a fragile but certain tenor against the deep breath and soft sweep of Nico Muhly's orchestrations." (Rolling Stone, February 2008).
The House of St Barnabas was founded in 1846 and attracts many visitors to its Georgian-era decor and stunning architecture. Located in the heart of Soho, it provides a perfect venue to host an intimate performance by one of Iceland's most important musicians.
Valgeir Sigurðsson @ www.myspace.com/valgeirs
More Information @
http://reykjaviknights.co.uk
Birt af Wim Van Hooste kl. þriðjudagur, maí 06, 2008