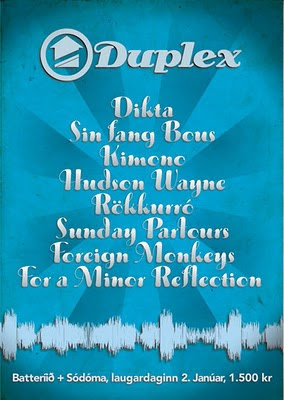 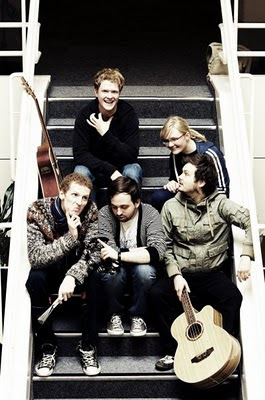 The 144. Song of the Week is Nóra's "Opin fyrir morði".
The band Nóra traces its roots back to a dark garage on the west side of Reykjavik. There, brother & sister Egill Viðarsson (vocals, guitar) & Auður Viðarsdóttir (vocals, keyboards), started making music back in 2006, along with their good friend Hrafn Fritzson on bass. The band was fully formed two years later when the trio was joined by drummer Bragi Páll Sigurðarson and guitar/mandolin/whatever-ist Frank Arthur Blöndahl Cassata. The band was quite busy in 2009, playing local venues and festivals. 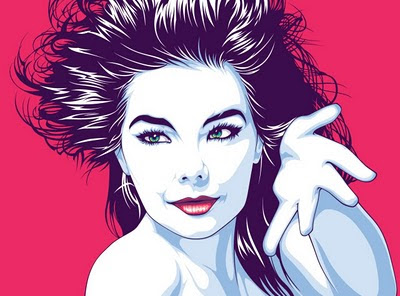 Book about the 100 Best Icelandic Albums ever: "100 Bestu Plötur Íslandssögunnar"

Best Icelandic Albums of 2009 according to Fréttablaðið Newspaper Journalists 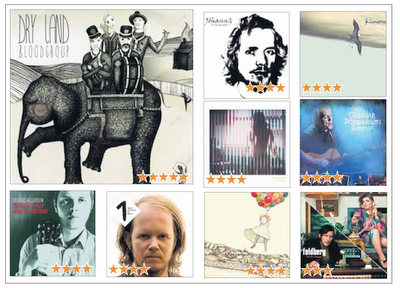 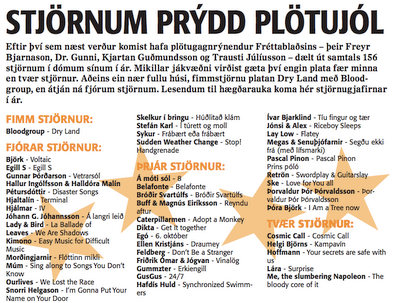 Best Icelandic Album of 2009: Bloodgroup's "Dry land" *****
5 stars for Bloodgroup
4 stars (Björk & others) - 3 stars (Á Móti Sól & others) - 2 stars (Cosmic Call & others)
The band Bloodgroup is a bit angry after a gig some days ago @ Reykjavik to Rotterdam festival for about only 40 people & some trouble with their flying tickets.
Birt af Wim Van Hooste kl. sunnudagur, desember 27, 2009 1 ummæli:

Some Kópavogur Punk Legends in an Exhibition 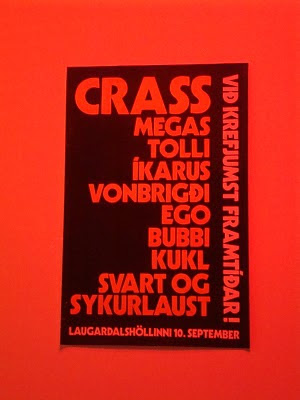 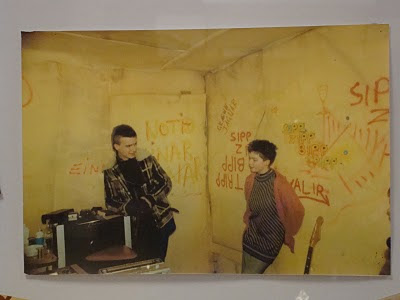 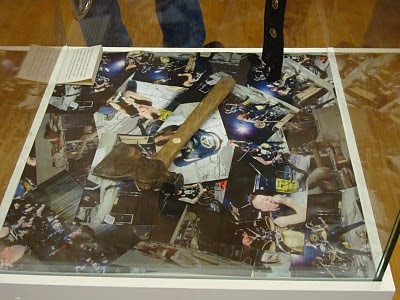 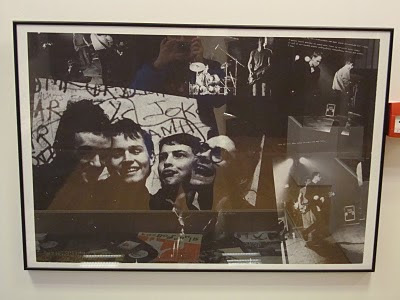 Purrkur Pillnikk
For those who didn't go the Punk Exhibition @ Kópavogur (closed now).
Here's an impression:
The rehearsal spots on a 3D map 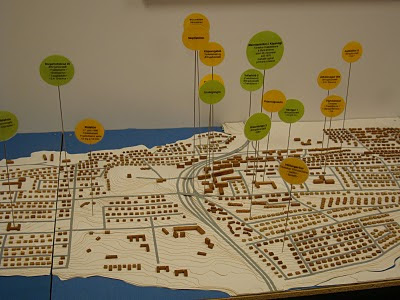 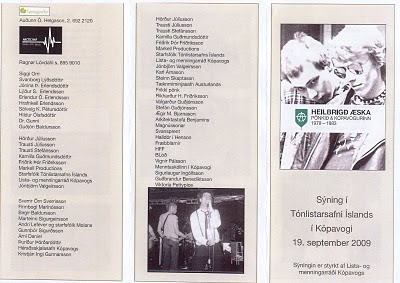 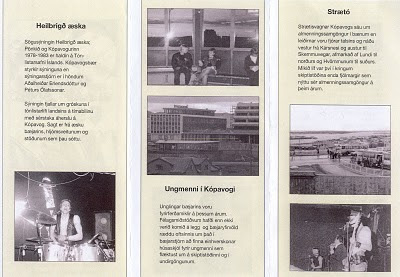 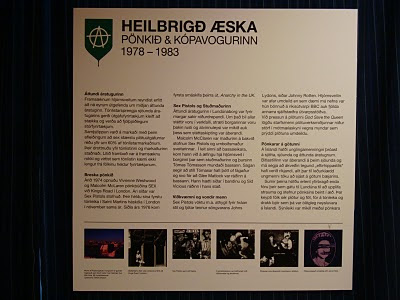 Watch a video of Fræbbblarnir @ the museum
here.

I went to see last October with Heiða Eiríks & Elvar of the band Hellvar.
You got the possibility to get dressed like a punk, not a big difference for Heiða anyway 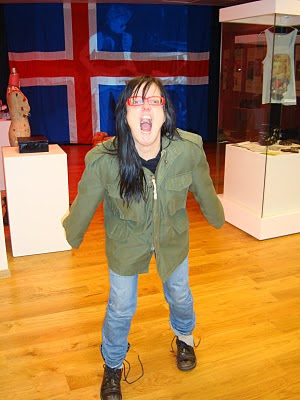 Heiða Hanging on the telephone... 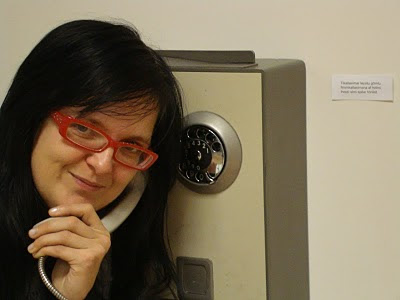 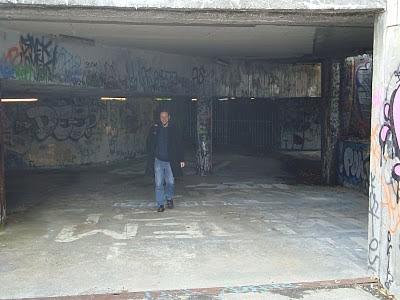 "Be courageous if you use the underground passage,
the youngsters don't bite"
(this passage was the favorite hangout place of the punk scene years ago) 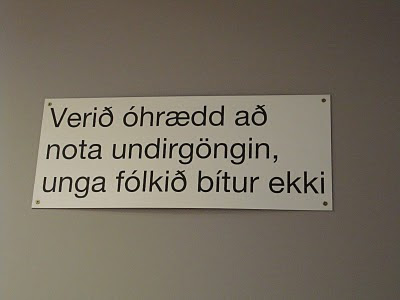 Icelandic Artists & Icelandic Label Artists on Stage in Belgium in 2010

Professor Batty made a nice video of Apparat Organ Quartet live @ Reykjavik Art museum @ Airwaves '06. I was standing somewhere in the front in the middle. A was a pitty they didn't play @ Airwaves '09, but after 2 years not performing on Icelandic ground, Apparat performed @ Réttir (Reykjavik Round-Up) festival in September 2009.
"Cruise Control"
www.youtube.com/v/X_wEVF3z4co&hl&fmt=18

Sigur Rós Live Tracks "Tíu Lifandi": A celebration of 10 years of live music with much gratitude from the fans 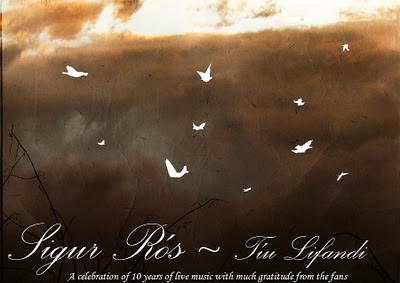 Efnisorð: Sigur Rós Ros Tíu Lifandi a celebration of 10 years of live music with much gratitude from the fans live recordings Icelandic music Iceland I love

Lights On The Highway

Don’t Be a Stranger

Your Secrets Are Safe With Us

I’m Gonna Put My Name On Your Door

Sing Along to Songs You Don’t Know

Where Do We Float From Here?

Stop! Handgrenade in the Name Of Crib Death ‘nderstand? 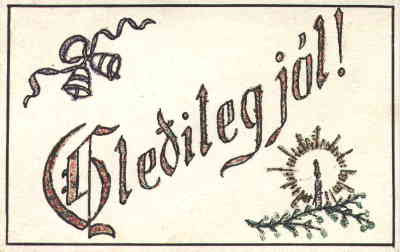 Bloodgroup in the Spotlight @ IMX

Bloodgroup
The Hippest Nerds Around

Bloodgroup are known as one of the most innovative, powerful and entertaining live acts in Iceland, and they have been busy playing music festivals in Europe and America, as well as playing independent shows since the release of their debut album. Their second album "Dry Land" is a product of Bloodgroups studio sessions for the last year and a half and has been frequent on "Best of 2009" lists in Iceland. The album has be available in record stores in Iceland since 2. December, and is scheduled to be distributed to the rest of the world early next year (2010).
IMX caught up with lead singer Lilja Jónsdóttir upon their return from a well received Ja Ja Ja night in London.
First up, tell us all about your new album, Dry Land - how does it sound and who is involved etc?
It sounds a bit more serious than our last album, and more melodic. Raggi, Hallur, Janus and I wrote, recorded and produced all the songs. Ólafur Arnalds wrote the strings.
Where was it recorded and how did you tackle it (any prior ideas about what you wanted to do? or more studio spontaneity?)
The album was mostly recorded in our own studio, Studio Síld. We have been working on the album for over a year, so much of the music on the album was recorded and written gradually over time. We didn't really have many prior ideas, we just made what came to mind and stopped when we felt it was ready.
It's been a while since SS - what have y'all been doing in the meantime?
Well we've been quite busy touring, besides that we've spent every day in the studio.
Obviously you've been playing a lot of gigs - any particular highlights? Which country has the most responsive crowds / knows how to party hardest?
We played an awesome gig in Berlin in 2007, in a gay bar called Schwutz (or something like that). A bunch of crazy lesbians trying to rip Janus' clothes off...that can't go wrong.
Bloodgroup actually started out as a live act rather than a studio band, is that right?
Well I guess we look at it like two seperate things, writing and recording music, and then take that music and turning it into a live show. The songs sometimes sound pretty different from what they sound like on an album.
In our last interview you mentioned that you had more rock than electronic backgrounds - how come the focus switched? Was there a trigger, event or process?
No, not really. When we started it was just Raggi and I, and some friends. Raggi developed an interrest in electronic music, and then the rest of the guys got sucked into it. Now we're major electronic geeks.
Is there a big electronic / dance scene in Iceland these days?
Yes, it is relatively big, but we don't really consider ourselves a part of that scene, since our focus is mainly on melodic pop music with bassy beats, rather than full on dance music. The electronic scene has some promising names, like FM Belfast and Sykur.
What kinds of electronic or dance artists (local or international) have influenced or impressed you?
We all love bands like Daft Punk, Aphex Twin and The Knife. Those are probably the main electronic bands that influenced us into doing our kind of music.
If you're in a club getting your party on and people aren't bouncing around, what's your tactic for getting their asses shaking?
We always try to play a good show. Many of our new songs have less to do with dance, so it's not really that big of a problem if people don't dance. We just want them to have fun. If we're playing a gig where the goal is to get people dancing, we just try to have as much fun as we can on stage. By doing that, we hope to influence people in the audience and make them have fun too.
What's the wisest thing anyone has ever said to you with regards to music?
It's not the notes or the chords, it's the silence in between (a drunk guy at a bar somewhere).
One of the band is Faroese: does he live in Iceland or is this an international relationship?
He lives in Reykjavík, since 2008.
Are you still performing with DJ Benni?
No.
What are your plans now the album is out? Tours? Singles? World Domination?
We have a single out, "My Arms", and we hope to release the next single early next year. Our next step is to release the album world-wide and tour Europe in the summer of 2010. Then, world domination!
Bloodgroup's Website
Source:
IMX 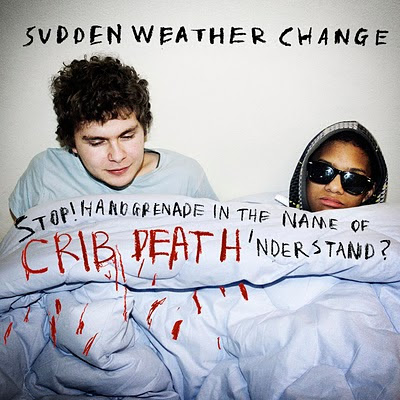 Dikta Album "Get it Together"

Ourlives Album "We Lost The Race" 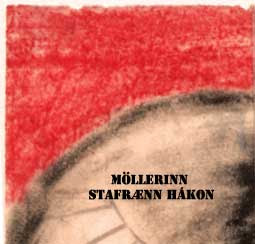 143. Song of the Week is a Christmas song by Stafrænn Hákon "Hátíðarskap".
Song was recorded/mixed/mastered in late November 2009. All instruments by Ólafur Josephsson. Lead vocals are by Magnús Freyr Gíslason.