Svavar Knútur from down under: Tasmania, the island where Jörundur, the King of Iceland died in the 19the century & where they brew the Best Australian Beer Cascade in the oldest Australian brewery.

"Baby will you marry me"
www.youtube.com/v/OsRGsfC4E1g&hl&fmt=18

Daníel Bjarnason in the Spotlight @ IMX 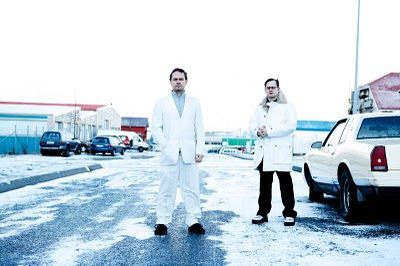 Photograph by Spessi
Ghostigital will play @ The Donau Festival this year. They go to Ethiopia for a musical excursion. Einar Örn Benediktsson & Curver Thoroddsen are working on their 3rd Studio Album, to be finished in May?
Einar Örn's contribution on the new Gorillaz album will not see the daylight. C'est la vie, says EÖB.
www.youtube.com/v/921AhmNI85c&hl&fmt=18 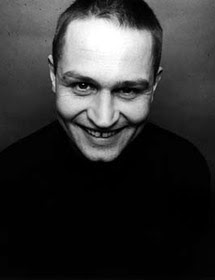 Amiina Live @ The University of Pennsylvania (2006) 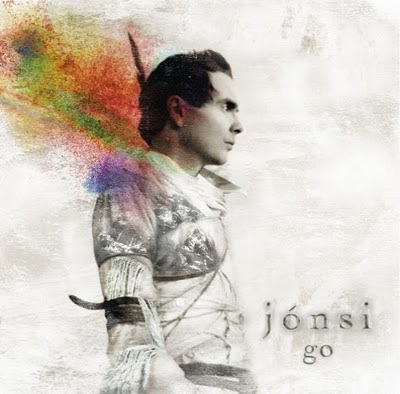 Sigur Rós in the Remix
"Sæglópur" by Steve Sampling
www.youtube.com/v/wZJgrgXDHSU&hl&fmt=18

Professor Batty of Flippism is the key shot this nice video of a young Retro Stefson.
www.youtube.com/v/mHbnJrWRZ4s&hl&fmt=18 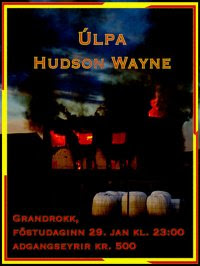 We Made God "Gizmo" Video - Preview of New Album

We Made God
"Gizmo"
www.youtube.com/v/jkYmxlTVsWA&hl&fmt=18

The band is working on a new album to be released this year. Here's a preview:
www.youtube.com/v/TD8ixetdB-A&hl&fmt=18 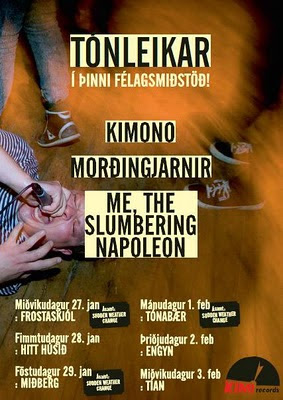 Sometime in the Remix: "Optimal Ending" 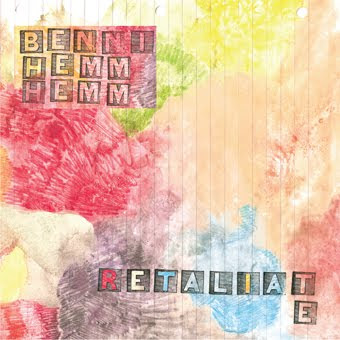 Benni Hemm Hemm aka Benedikt H. Hermansson moved to Edinburgh, Scotland. Benni made a 3rd EP @ home with his newly bought home recording gear. This 5-song EP is entitled "Retaliate". It will be released as a 10" and as CD in March/April. All songs are in English (Scottish?).

Music from the Moon teaser with Benni
www.youtube.com/v/doDsHVhR4Mo&hl&fmt=18 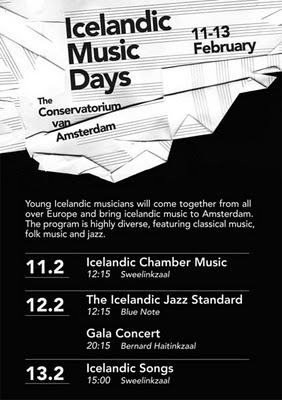 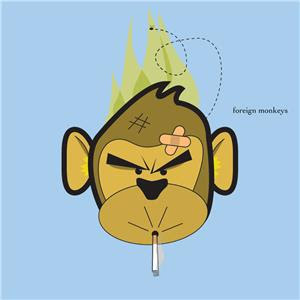 148. Song of the Week is Foreign Monkeys' song "Los".
Biography
The Foreign Monkeys was originally founded in December 2005. The line-up back then was very different from what it has become today. Soon, the band was reincarnated and a new line-up competed the Icelandic battle of the bands in the month of March the following year, and won. This gave The Foreign Monkeys a nation wide recognition. By this time TFM had taken on the closest to their current form. The bands powerful live performance created an immediate buzz, and their reputation spread fast, landing them larger crowds of rock thirsty audience. At the beginning of May 2006, only 2 months after winning BOTB competition, TFM performed in one of the largest venues in Iceland in front of 5.000 people. This performance was the opening act for highly acclaimed English artists, Badly Drawn Boy, Elbow and Echo and The Bunnymen. In August 2006, TFM would play their largest gig to this date, in front of 15.000 people in their hometown, at a festival with local artists. In 2006 TFM also started working on their first recording which is yet to see the light of day. In 2007, after a times of brewing frustration within the band, the singer left, leaving the project hanging by a thread. With the first album well in the making and a huge buzz created, the band was not sure if they would carry on. A few months later, the band decided that the album would be finished, and hired a rhythm guitarist, while the bass player and lead guitarist would fill the void the singer left within the band. Soon the vocal parts were recorded and the album finished. Debut Album "Pi" was released last year. The new line-up is finally ready to perform again and is bound to make an impact on the Icelandic scene.

Hoffman Live @ Sódóma Reykjavík venue
Hoffman, a band from Heimaey, Vestmannaeyjar/Vestman Islands. Their first EP was called "Bad Seeds". Last year they released "Your secrets are safe with us" (9. October 2009). The title of the album is related to the economic meltdown in Iceland. The band went searching for a good recording engineer and in the end Axel "Flex" Árnason was the one who got the job. The album was recorded in Vestman Islands @ Island Studios (Faxastígur 6, 900 Vestmannaeyjar), mixed & mastered in the Reflex Studios in Reykjavik.
"Ride & Right"
www.youtube.com/v/g7VrLxw84HI&hl&fmt=18

"Your secrets are safe with us"
www.youtube.com/v/e4MRf88uFHw&hl&fmt=18

"How we pick & how we bother"
www.youtube.com/v/EUe0QKbGKps&hl&fmt=18

Seabear @ Schlossplatz, Berlin, Germany yesterday night.
"Arms" a song of debut album "The Ghost That Carried Us Away " (2007)
www.youtube.com/v/z6o0fcF8h8Q&hl&fmt=18

In 1994, 50 years after the independency of the Republic of Iceland, the label Smekkleysa (known abroad as Bad Taste, or even as The Sugarcubes label) released a compilation CD to celebrate this "half century" (in Icelandic: í hálfa öld). A lot of great artists on this CD, like Texas Jesus, Unun, Curver, Bubbleflies, Yukatan, Maus, Olympia & Björk.
Among the artists featured on this SM 44 CD, is the band Victory Rose. The band was formed on 4. January 1994 (the day Jónsi's sister Sigurrós (in 1 word) was born!) by high school friends Georg Hólm, Jónsi Birgisson & Ágúst Ævar Gunnarsson. They met each other in the Kaffitár of the school @ Christmas 1993.
In a small studio downtown Reykjavik (Fellahelli) they were able to record a tape, but only completed one song before their billed time ran out (6 hours). The trio send the demo (years later Georg Hólm told David Fricke, senior editor of Rolling Stone Magazine, it was "maybe too floaty") to Smekkleysa. Þór Eldon, guitarist of the Sugarcubes, poet & husband of Björk, heard the song & and het wanted the song for a compilation record of their label. So the song called "Fljúgðu" became track # 16 on the album.
Running time: 4:05
Lyrics by Jón Þór Birgisson, Ágúst Ævar Gunnarsson
Music by Jón Þór Birgisson
Later the band changed their name into Sigur Rós. 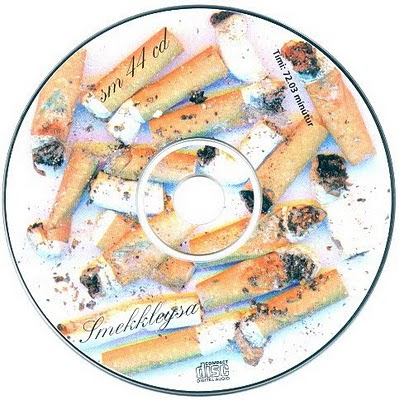 The Sound of Iceland - The Importance of Icelandic Music

The sound of Iceland by Marianna Fridjonsdottir

Through the noice & ugliness shines the beauty Sources:
Wikipedia
You can download the cassette as 2 mp3 files @ Kill your pet puppy 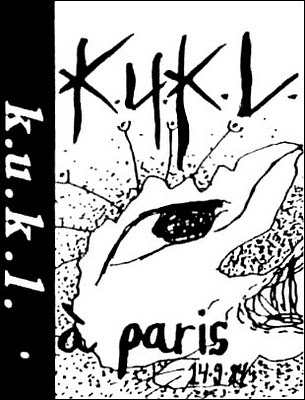 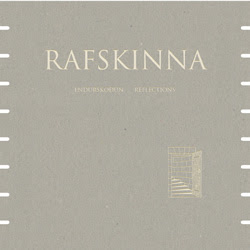 Langi Seli og Skuggarnir
A video by Professor Batty of Flippism is the key Blog
www.youtube.com/v/EHrraTdPCJs&hl&fmt=18

Pétur Ben on an European Acoustic Tour in February-March 2010

Pétur Ben on an Acoustic Tour in Germany, Switzerland, Belgium & The Netherlands
The singer-songwriter & composer-arranger will be playing/trying out some new stuff. His Debut Album "Wine for my weakness" came out in 2007. He did a lot of music for other people (Mugison, The Telepathetics), wrote the movie score for the movie "Children" (Börn),
Trailer
www.youtube.com/v/kMSjNHyZEqQ&hl&fmt=18
music for the Iceland Dance Company together with Sugarcube Sigtryggur Baldursson, & Frank Hall.
"Velkomin heim" (Welcome home) - Iceland Dance Company

New Hudson Wayne Album "How Quick is Your Fish?" released by 12 Tónar 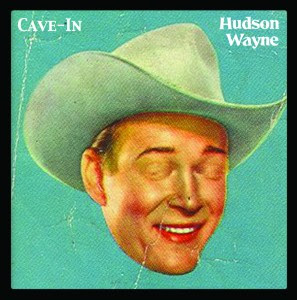 The band Hudson Wayne will release another album on the fabulous 12 Tónar Label, 5 years after the release of "Battle of the Banditos". The album is called "How Quick is Your Fish?" & will see daylight in February.
The band is playing with a new guitarist since autumn, Ólafur Jónsson, member of The Funerals & Kvartett Ó. Jónsson og Grjóni.
The band Hudson Wayne is going on a tour in Germany together with Seabear in February (Norðrið).
Listen to the new song “Cave In” @ Rjominn.
Hudson Wayne @ MySpace
12 Tónar