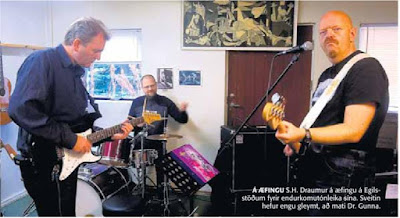 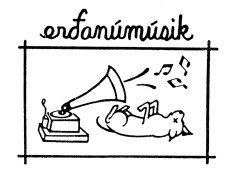 Lára Rúnars' New Video "In Between"

A Complete Mess with Ghostigital @ Airwaves 2010 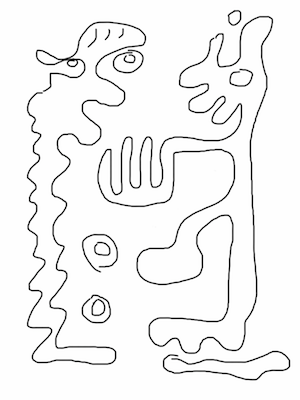 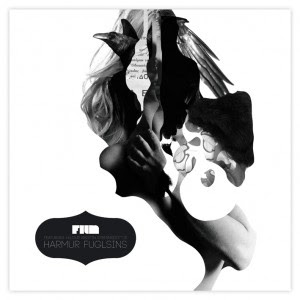 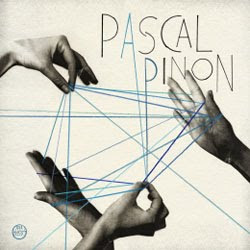 Pascal Pinon News
Pascal Pinon are the twins Jófríður and Ásthildur, two girls from Reykjavík, Iceland. When they were only fourteen they got together with two of their friends and decided to start a band. Using the instruments they found - like a guitar, a Glockenspiel and of course: their voice - Pascal Pinon worked in the twin's bedroom. At the same place they played their first gig: calling it ‘The Friendly Concert’. Only a few months later Pascal Pinon had already played various local venues and started recording their first album in a rented house using only one microphone. It sounds really cute. The main impact on the twin’s music may be a certain shyness when faced with the thin walls of their bedroom. You’ll find a very special record: A twee mixture out of acoustic neofolk and low-fi pop: an enjoyable journey through a teenager’s life with a remarkable sense for songwriting. It was nominated for The Icelandic Music Awards as Newcomer of the Year 2009. Now Morr Music, that always had a special link to Icelandic music scene will release it worldwide in early 2011. This 7inch contains three tracks from the forthcoming album.

Tracklisting:
1. I Wrote A Song
2. Baldursbrár
3. New Beginning
The sleeve was designed by Julia Guther.

For the 4th time in a row, there will be an off-venue Airwaves 2010 program @ Norræna húsið/The Nordic House.
Start on Thursday 14. October @ 13:00
More concerts on Friday 15. October & Saturday 16. October.
On Sunday 17. October a screening of Music Movies
Norræna húsið

New Bang Gang Album
The Album of the band Bang Gang (of Barði Jóhannsson) will be in the shops next month. Including an extra CD with cover songs by Páll Óskar, Dikta, Daníel Ágúst (GusGus, Esja, Nydönsk), Mammút, Eberg, Arnar (Leaves), Singapore Sling, Bjarni (Cliff Clavin), Bloodgroup & Ourlives.
Barði has worked with Páll Óskar for the Album "Deep Inside", released back in 1999.
2 Songs are 2 times on the album:
- "One More Trip" by Singapore Sling & by Dikta.
- "Sacred Things" by Páll Óskar & by Bloodgroup.
Bang Gang
Source: Fréttablaðið 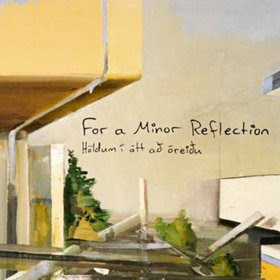 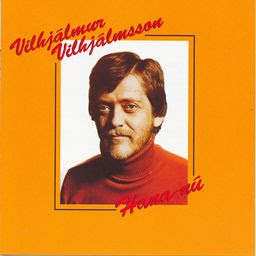 Hana-nú (1977)
Album "Hana-nú" was released on 23. June 1977 on Hljómplötuútgáfan Label.
Vilhjálmur Vilhjálmsson was born on 11. April 1945. His father, Vilhjálmur Hinrik Ívarsson, was a well known musician. During his childhood Vilhjálmur showed his musical talent. He studied both law & medicine, but didn't finish this studies. In 1970 Vilhjálmur became a pilot and moved to Luxemburg. Living far away didn’t stop him in recording two LPs in Iceland, "Glugginn hennar Kötu" (1972) and "Fundnar hljóðritanir" (1973).
In 1974 Vilhjálmur got married and moved back to Iceland and in 1975 he opened Iceland’s first complete recording studio. In 1978 Vilhjálmur was planning a new album when he passed away on 28. March in a tragic car accident in Luxemburg while working as a pilot. He was just 33 years old.
Album was recorded with help of Tony Cook & Magnús Kjartansson (Júdas) @ Hljóðriti Studio @ Hafnarfjörður in December 1976.
All lyrics were written by Vilhjálmur Vilhjálmsson.
Two songs written by American Harry Chapin ("Einhverntímann" & "Einshljóðfærissinfóníuhljómsveitin"). Harry died in a car accident, just like V.V., in 1981.
The lyrics of the song "Söknuður" (Longing or Missed dearly) were written after the death of a friend Jón Heiðberg. Jóhann Helgason wrote the music. The song is played very often @ Icelandic funerals nowadays.
Photograph on the cover was taken by photographer Arni Páll.
About 21.000 copies of the LP were sold in Iceland.
In 2008 the album was re-released on CD with 2 extra songs.
Songs on the Album:
Side 1
1. Og Co
2. Ég Labbaði í Bæinn
3. Lítill Drengur
4. Einhverntímann
5. Söknuður

Icelandic Artists @ Iceland Airwaves 2010 Festival - U got the Look & Listen

I've put a lot of music & videos in this post.
But a few days ago a lot of other artists were confirmed to play @ Airwaves. So let's have a look & listen. 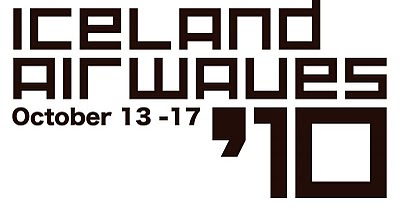 Gigs in Reykjavík the Next Weeks/Pre-Airwaves

The History of Icelandic Rock - Part 22

The History of Icelandic Rock Music
Part 22
Life Outside The Mainstream (1982–1985)
Dr. Gunni in Grapevine Magazine (Issue 15, September 2010)
Bubbi Morthens and Utangarðsmenn hit the dull sugarcoated Icelandic pop scene in 1980, spreading raw excitement in their wake. Almost overnight all the seventies pop stars seemed passé.
In 1981, the new rock scene exploded with bands such as Þeyr, Purrkur Pillnikk, Tappi Tíkarrass, Fræbbblarnir and Jonee Jonee doing their best stuff. The wave was perfectly captured in the documentary film "Rokk í Reykjavík", which was premiered in April of 1982. After that, things started to fade out. The rise and demise of Kukl has already been documented in these pages, and next time I plan to tell the story of my own band, S. H. Draumur, which struggled on in 1982–1986 to little fanfare.
The ‘mainstream ’ returns - Disappointment
Things were getting seriously "mainstream" all over again. Rás 2, a “pop" branch of Icelandic State Radio, commenced broadcasting in December 1983. Up to that point, "pop music" had not been a priority on the only radio station in Iceland, ‘The Steam’, as it was nicknamed. Some people thought the new station would tend to fresh sounds, but soon it was obvious that it mainly took care of what was already popular.
The seventies fun rockers Stuðmenn - who had been dormant since 1976 - had a massive comeback with their musical comedy "Með allt á hreinu" (aka ‘On Top’). It premiered before Christmas in 1982 and more than half the island’s population would eventually go see it at the cinemas. Stuðmenn would go on to be the nation’s darlings during the eighties and nineties - often referred to as "The band of the people". Stuðmenn lay the foundation for the "Icelandic pop sound," a well that many bands have drunk from ever since. Vonbrigði (“Disappointment”) were four young guys that came from the Breiðholt suburbs. Brothers Tóti and Árni on drums and guitar, bassist Gunni and cocky singer Jói. They had gained some fame belting out the opening tune of Rokk í Reykjavík - the anthem "Ó Reykjavík" with lyrics by poet Didda, who wrote many of the band's lyrics.
www.youtube.com/v/Bi_G3wXdwV4?fs=1&hl&fmt=18

Vonbrigði leaned towards the Gang of Four/Killing Joke-school of hard post punk and were furiously excellent. The band released two records during their eighties life span, a 4 track 7" EP in 1982 and the seven track "Kakófónía" EP in 1983. Neither managed to capture the true essence of the band as they recorded the newest songs in their repertoire and were too in awe of the studio effect possibilities to just keep it real. Vonbrigði split up in 1985 but reformed in the ‘00s.
The band has released two CDs of new music and new, almost heavy metal versions of their old songs.
The rise of "Killembilly"
Oxsmá was about the most exciting thing in Iceland from 1982-1985. The group had formed in the Reykjavík Art School in 1980, but didn't start to play live until 1982. Hrafnkell "Keli" Sigurðsson sang, Axel "Seli" Jóhannesson played guitar, and Óskar "Skari" Jónasson occasionally blew a sax and behaved like an idiot. When drummer Kormákur "Kommi" Geirharðsson was added to the equation the band finally clicked. Kommi had played with a cool new wave group, Taugadeildin (“The Neurotic Ward” – one fine EP released in 1981), and punk group turned new romantic band Q4U. Lead by singer Ellý this fine group released a 12" EP in 1983 and is in the midst of a comeback right now.
Oxsmá took their cue from The Cramps and the other punk rockabilly acts of the early eighties and at first tended more to their looks than to their music. After doing ultra slow versions of "Fire" and other rockabilly classics, original material started to pop up in Oxsmá's program. They called their music "Killembilly," and tellingly their lyrics (written by Keli) were tongue in cheek funny, often about horrible stuff and sex with titles (in Icelandic) like "Bibi's Tits" and "Bits of Elsa". More members joined, Danny Pollock fresh from his Utangarðsmenn stint played guitar for a while, and bassist Jón Skuggi and Hörður "Popcorn" Bragason on Hammond organ became steady members.
“Clever Kitty, drunk in a bathtub”
The Oxsmá guys were multi talents. They made two films, first the sci-fi horror short "The Oxsmá Planet" followed by the ambitious feature "Suck Me Nina" a drama comedy that was set in the Icelandic hippie years. The "feel" of this film would some years later be repeated in Óskar Jónasson's much loved "Sódóma Reykjavík" comedy. Besides "normal" concerts Oxsmá would stage arty theatre shows and make environmental sculptures.
Oxsmá released a cassette in 1983 entitled "Bible For The Blind". It had sixty minutes of exciting lo-fi killembilly, including a song sung by an uncredited Bubbi Morthens, who just happened to come by the rehearsal space. A cassette of the "Suck Me Nina" soundtrack was also released (Oxsmá doing their own take on Icelandic hippie rock). 1985 saw the band's only record, a 3 track EP called "Rip Rap Rup".
www.youtube.com/v/Y77saAN4y94?fs=1&hl&fmt=18

On the A side Keli sang once more about a girl, this time she was called Kittý (in Icelandic, of course): "Thirteen years old / kinky costume / what a perfume / clever Kitty / drunk in a bath tub / chocolate."
Oxsmá's final concert was at Hótel Borg in July 1985. Soon afterwards, Keli and Skari went to London to attend art and film schools. The coolest looking Icelandic band ever hasn't returned since, and unfortunately none of their
music or films are available to the general public. You can hear some of it on YouTube, though.
www.youtube.com/v/0Qz9g5349PM?fs=1&hl&fmt=18