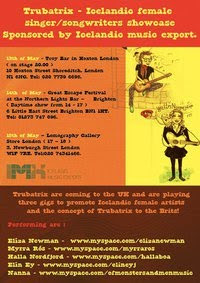 Trúbatrix UK Tour
Thursday 13. May - Saturday 15. May
London - Brighton - London
Sponsored by IMX
Trúbatrix are coming to the UK and are to playing three gigs to promote Icelandic female artists:
13. May @ Troy Bar, Hoxton London (on stage @ 20.00) 10 Hoxton Street Shoreditch, London N1 6NG. Tel: 020 7739 6695
Admission: 4 £
Buy ticket here : http://www.wegottickets.com/event/80412
14. May @ Great Escape Festival @ the Northern Lights Bar - Brighton (Daytime show @ 14:00 - 17:00) 6; Little East Street Brighton BN1 1HT. Tel: 01273 747 096
15. May @ Lomography Gallery Store London (17 :00 - 18:00) 3, Newburgh Street London W1F 7RE. Tel: 020 74341466
Trúbatrix are a collective of Icelandic female artists who organize concerts, release records and promote original Icelandic female artist to the world.
The Trúbatrix girls took 2009 by storm by releasing an album "Taka 1", touring around Iceland, and organizing successful showcases at the Iceland Airwaves Festival and the Round up Festival.
The album "Taka 1" was released on 2. June 2009 and was an instant hit selling out many times. It is a compilation album with 17 songs , all Icelandic female artists playing original music. The artist vary from well knows singers to up and coming acts who many have moved on to records their own albums after appearing on the combilation.
2010 will be just as exciting for the girls as a new album will be released in the summer of 2010 as well as tours around Iceland and abroad.
Icelandic artists on stage are:
Elíza Newman
An Icelandic solo singer and songwriter. She released her second solo album - "Pie in the Sky" in December 2009 with Smekkleysa/Bad Taste in Iceland. Her first single from Pie in the Sky - "Ukulele song for you" topped the Icelandic National radio chart in 2009 and went on to become one of the most popular songs of the year in Iceland. Elíza is also known as former lead singer of all-girl Icelandic band Bellatrix, and the rock band Skandinavia as well as being instrumental in the Trúbatrix movement, which promotes Icelandic female artist with gigs and album releases around Iceland .
Recently Eliza has caused quite a stir with her volcano song called "Eyjafjallajökull" as seen featured on the Al Jazeera News Channel. The song has become one of Al Jazeera's most popular news pieces ever and the song is a big hit on the internet, with The New York Times, Huffington Post, The Daily Telegraph and countless internet sites.
Live @ Buffalo Bar, London (March 2010)
www.youtube.com/v/6CDqrNT2x5w&hl&fmt=18

Elíza Newman @ MySpace
Myrra Rós
Icelandic singer/songwriter Myrra Rós is one of the leading singer/songwriters in the icelandic acoustic music scene.
First picking up the guitar @ age 20, Myrra Rós played her first concert for an audience of a pair of red parrots. Her crowds have been growing steadily ever since, eventually crossing species to the human race, filling up local cafés in Iceland and playing successful tours in Germany along with the International Troubadour Conspiracy. Her concert performance has more than once whisked a blanket of hushed adoration over an otherwise absent minded crowd, prompting an electric silence while her voice delivers stories and emotions from the depths of the human condition.
Myrra Rós has played an important role in establishing and strengthening a growing network of female songwriters, both local and international. The network, named Trúbatrix, has received much praise and recognition in the Icelandic music scene and is already starting to integrate with other international cooperatives of women singer/songwriters.
"Devil's grin" Live @ Iceland Airwaves 2009
www.youtube.com/v/BFHmWg9ig2g&hl&fmt=18

Myrra Rós @ MySpace
Halla Norðfjörð
This young girl bursted into the singer/songwriter scene in Iceland
and resembles artists like Bonnie "Prince" Billy, Bon Iver and Ane
Brun. Playing delicate tunes on her guitar combined with a voice as
that of the calm night breeze gives her that magical extra something
- to spark a truly unique sound. Lately she's been active in the
acoustic scene and captured, without ease, the hearts of the masses.
She has played at various festivals in Iceland, f. ex. Iceland
Airwaves, Melodica Acoustic Festival and toured around the country
with Trúbatrix when celibrating their first album, Trúbatrix taka 1.
"Maybe" Live @ Iceland Airwaves 2009
www.youtube.com/v/Z5eK65wiGTk&hl&fmt=18

Halla Norðfjörð @ MySpace
Elín Ey
Icelandic Elin Ey started singing at a young age. However, it wasn’t until she discovered Led Zeppelin that she really wanted to play guitar. She got one, and learned to play it with help from the internet and her dad. Today she’s reckoned to be one of the future stars of the active Icelandic music scene. “I compose when I am feeling down or a little bemused, then it just comes to me naturally” Elin says very humble. Her songs are based on reality and life as she sees it, and are quite dramatic. "Love is the most important thing in life, people tend to forget that.” Coming from a family of musicians, Elin says that it has had both direct and indirect influences on her direction in life. “I wasn’t trying to make a perfect album, but a diverse album. After all, what really makes music is the imperfection.”
Live @ Airwaves 2010
www.youtube.com/v/VuR2ZIOmW-Y&hl&fmt=18

Elín Ey @ MySpace
Of Monsters and Men
Nanna is the lead singer and guitarist from the Icelandic band Of Monsters and Men, a four piece band that first brought attention
to themselves after winning this years Icelandic Battle of the Bands/Musical Experiments, the main platform for up-and-coming Icelandic bands since 1982.
The band/Nanna plays dreamy folk-music with a touch of pop. She will be performing some of her own and the bands songs.
Of Monsters and Men Rehearsing
www.youtube.com/v/dTAoo34wDxk&hl&fmt=18