English Synopsis of Me, Myself & I in Morgunblaðið (March 2010) 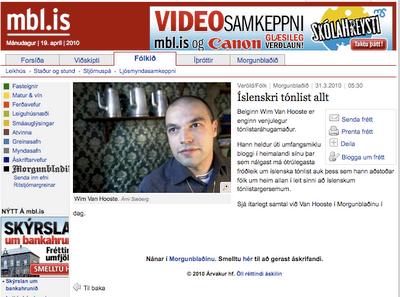 Some non-Icelandic friends asked me what did you tell the newspaper in your interview.
So I made an English synopsis of the article with the title "I love Icelandic music".
“Ég elska íslenska tónlist” by Arnar Eggert Thoroddsen in Daily Newspaper Morgunblaðið
- Belgian Wim Van Hooste loves Icelandic music for 23 years
- Blogging about new & old Icelandic music

Belgian Wim Van Hooste is specialist in Occupational Medicine @ Brussels.
About 15 hours a week, he’s working on his blog I love Icelandic music.
While driving to work, he listens for hours to Icelandic music.
He owns a lot of Icelandic vinyl records and CDs, e.g. 150 Björk releases.
Lived in Akureyri
I met Wim in a coffeeshop @ Laugavegur, on his way to Aldrei fór ég suður Festival.
He’s coming to Iceland for a holiday twice a year. In spring or early summer & in the autumn for the Iceland Airwaves Festival.
"I heard the single “Ammæli” by the Sugarcubes @ the age of 16. I liked the song, the band and later on the country. I ordered more exclusive Icelandic music through the Smekkleysa Post Order service. I've been following the news from Iceland since 1987.
I saved some money and came for the first time to Iceland in 1991.
While travelling around the country, I met people from Australia, USA, etc. who visited Iceland also because of the music."
In 1998 Wim came to Iceland and he worked for more than a year as medical doctor @ Akureyri.
Streaming Popppunktur
"The band Skátar played in Belgium but I missed the concert. Didn’t know of the gig. That’s one of reasons to start the blog. I was searching for things about Icelandic music on the net, but I didn't detect a lot of interesting stuff in English.
I not only blog about new Icelandic music, I also like to go into the history. I don’t love all Icelandic music."
The blog is taking part in the music blog collective Music Alliance Pact, with 36 blogs of 36 countries.
"I work independent, updating the blog in the evening & the weekend. Putting stuff online immediately after I found it. I listen also to non-Icelandic music, but I made up my mind to focus on Icelandic music.
I try to do it in an scientific/academic way, try to have all the facts correct."
Wim wanted to write a book about his interest, but Paul Sullivan did it already: Waking up in Iceland (2003).
"I had something similar in my mind. But he’s better in English than me.
Today, with the internet, it is easy to follow the Icelandic radio & television by streaming. I watched the latest edition of Popppunktur on my computer."

Wim's favourite artists are Sykurmolarnir, Björk, Ensimi, Bang Gang, …. New artists like Pascal Pinon & Bárujárn.
"I want to make a list of my 100 favorite Icelandic albums, but I didn't succeed in making it yet. My opinion is always changing."
He exchanged his vinyl edition of HAM’s "Buffalo Virgin" for the real 1977 debut of Björk.
Hudson Wayne's debut Album got a new home, somebody wanted to sell the rare record to a real fan. Wim knew a big fan of the band to do him a favour. 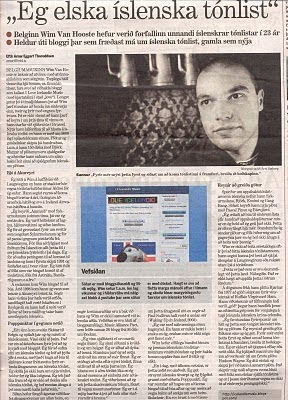